Here's Another Clue For You All....

I have an update to my earlier post regarding the mysterious disappearance of the Astros logo from certain late 1960's Fleer sets and the missing team name from Topps cards around the same time, but here is another twist, courtesy of the 1966 Topps Rub Off set: 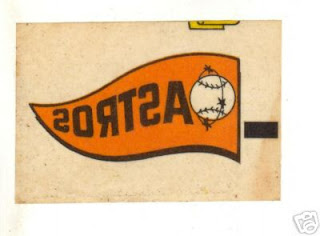 Wait, something looks odd, but I can't put my finger on it. Since the image is reversed (so it will show up correctly when rubbed off), lets reverse the picture to get a better look: 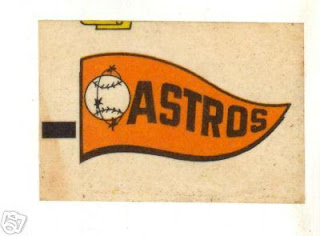 Hey -this is an Astros logo I've never seen before! What happened to the Astrodome?

If you are not familiar with the 1966 Rub Off set, it was an insert in packs of 1966 Topps Baseball cards featuring players as well as team pennants, as seen on some of these uncut strips: 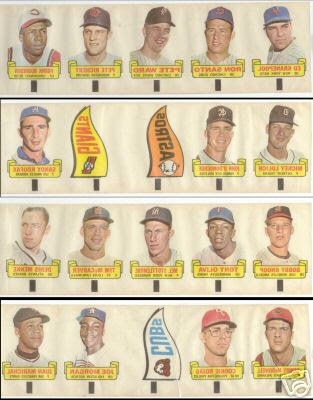 The team pennants are nearly identical to the pennants on the 1965 Topps Baseball cards, and carry the same team logos that were used that year - except of course the Astros: 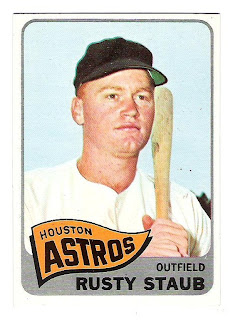 As I covered in my earlier post, the Astros unveiled their new insignia in December 1964 shortly after the team changed its name from the Colt .45s as seen from this newspaper article: 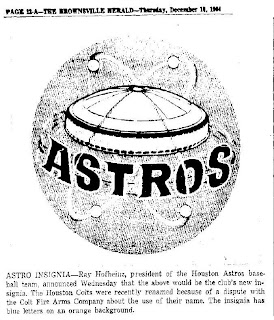 This would have given Topps over a year to acquire the artwork for the logo to include in the 1966 Rub Off set.

Either Topps didn't bother trying to get the logo, or else they didn't have permission to use it. In either case, it looks like Topps just decided to create their own version.

Whats interesting is that the Astros logo shows up in the 1966 Baseball set as you can see with Joe Gaines' shoulder patch: 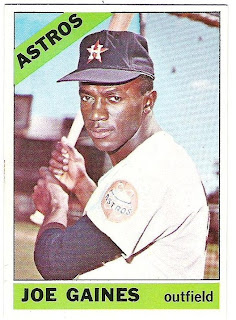 I'm guessing the improvised logo was more a result of Topps getting to the final stages of putting together the Rub Off set thinking that had all the artwork necessary to do the pennants ("we'll just use those logos we put on the 1965 cards"), and then realizing that the Astros didn't have a logo from that set. Otherwise, if it was an issue over having permission to use the logo, I don't think Topps would have been using pictures in its card set with Astros players clearly wearing the logo.

Yet another odd twist to the Astros mystery, and a very unique (and never seen again) logo!
Posted by Fleerfan at 8:45 PM

I just recently found this site and think it is awesome! Keep up the good work.

The real reason why Topps didn't use the Astros offical logo is that the logo was probably was too busy. All logos that Topps used were probably large in size whey they obtained them. However, when they print the cards, they have to reduce the art work so it would fit nicely. The Astros logo with the detail of the Astrodome and the orbiting baseballs and line would have been too hard to see that when they printed the actual logo it would been some what illegible. Also factor in that printing presses 40-50 years ago don't have quite the detailed results as they do now (computers and much smaller parts for fine details),logos had to be some what simplified such as the Mets logo they used. The Mets logo did not have its familiar stitching, but Topps compromised by coloring the sky of the logo orange! It wasn't until the early 1980's when card companies could print logos pretty small that they could be legible. I'd wager dollars to donuts that is the case.

Sorry if it is a little late, but better late than never. Hope it helps you out!