As we keep rolling along through the late 60's / early 70's Fleer issues, the next oddball item on our list is the 1969 Fleer Baseball Pennants and Stamps: 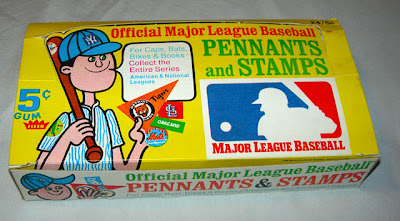 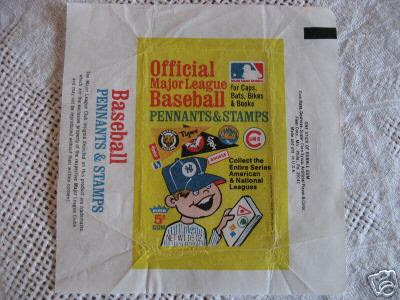 As with all the Fleer releases from around this time frame, the wrapper has a 1968 copyright, but that date pertains to the copyrights for the logos and not the year the issue was released.

This set is from 1969 given that the Seattle Pilots make an appearance as well as the other 1969 expansion teams such as the Royals, while the Phillies are still sporting their pre-1970 logos (meaning these couldn't have come from 1970). Apparently however, the Expos were not included. The Expos do not appear in any of Fleer's various 1969 releases, but finally appeared in 1970.

Each pack contained a sheet of stamps that would contain a large team pennant, a large team logo, a team cap, and 7 smaller stamps on the right side of the sheet as shown below: 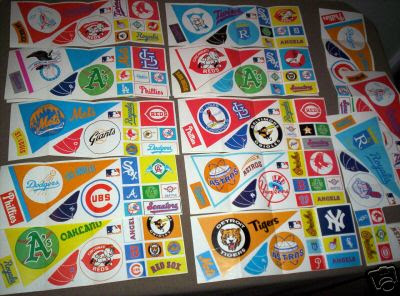 This is the only picture I've seen for these in the form of the complete sheets that you would have found in a pack. It is a very colorful release, and gave kids a number of different team logos on each sheet.

If we assume every team had a pennant (except the Expos), that would mean there would have been 23 different sheets. However, there are also AL & NL pennants, so it looks like there were 25 different sheets.

These were packaged with a quiz card, even though the packs don't mention them. Given the packs would have been very flimsy without something a bit more sturdy like a thin piece of cardboard, Fleer included a quiz card in the pack to provide a solid backing. In case you are wondering what I mean by quiz card, here is an example: 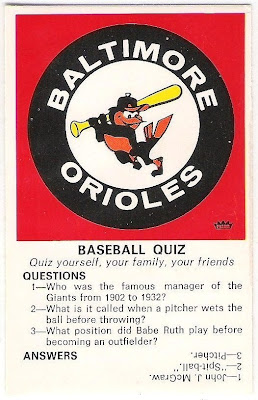 I will be getting to the various quiz cards that Fleer issued in future posts.

At least one kid saved the loose stamps that had been removed from the sheet as one auction had the following loose stamps: 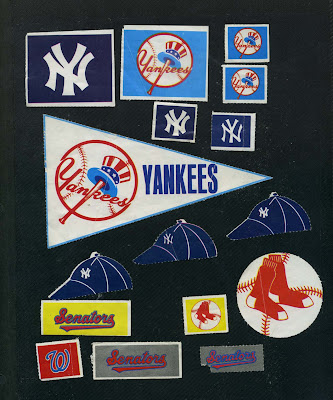 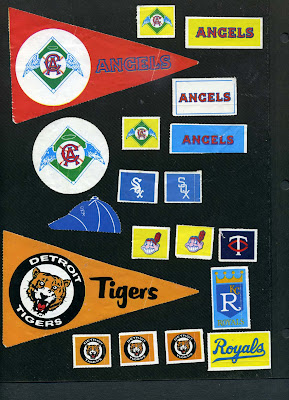 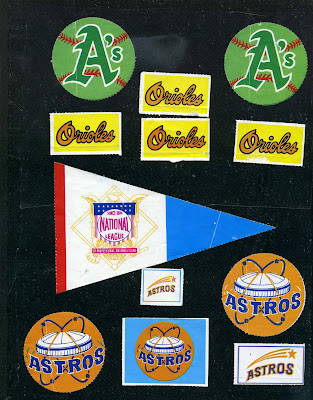 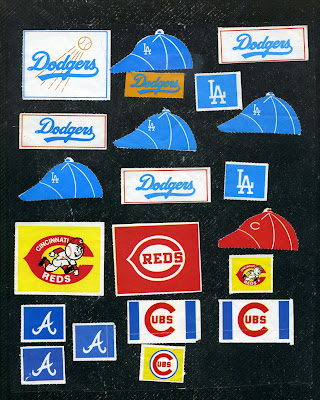 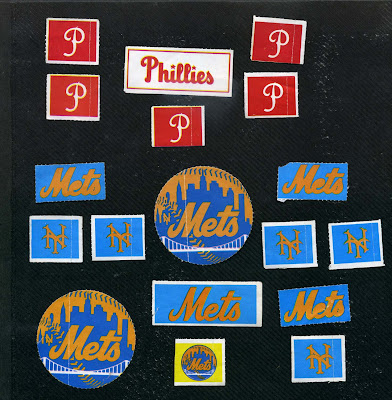 Given that these aren't cards, most kids wouldn't think about saving a complete sheet of stamps - they'd likely remove the stamps and stick them. While plenty of the cloth stickers from around this time still survive today and can be found pretty easily (because even though they were stickers, they were also standard card size and possibly more likely to be treated and saved like cards), this release seems to be somewhat obscure - probably both due to limited demand for this release when it came out (Fleer didn't do a second series), and due to the nature of the release itself (perforated stamps), this is a rarely seen item.

As you can see, Fleer was really trying to get their moneys worth out of their license to use MLB logos. In 1969 alone, so far we've seen 3D trophy plaques, Iron Ons, and now Pennants & Stamps. If Fleer couldn't produce player cards, they were at least trying many different ways to attract some of kids baseball card spending money.

Here is the Pilots Pennant sheet that 1969PilotsFan mentioned in the comments below. Thanks Sean! 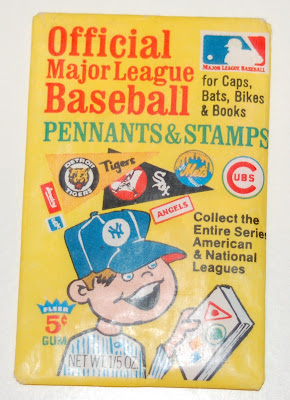 and have done a post on opening the pack

which yielded this great sheet:

Great, great blog! I loved those Fleer stickers -- even the ones that were inserted one per pack.

Hope you don't mind, I liked to your site.

Keep up the great work!

Thanks for leaving your comments. I just checked out your blog and thought it was great. I enjoyed the "magic sock" post. Thanks for adding me to your links and I've added you to mine as well!

This is a cool blog!

Great Blog again, I have some 2 1/2" x 5" cards which feature picture of MLB stadiums. They appear to have the same type lettering as the Fleer quiz cards featured in this blog. There is no copyrite on the card or company name. Can you identify?

I'm glad I found this site. I wondered what these were. I have the Seattle Pilots sheet. If you want a pic, let me know.

Yes, I would really enjoy seeing the Seattle Pilots Sheet and would like to post the picture on the blog if you wouldn't mind.

You can e-mail me at fleerfan@gmail.com

I will be listing some 69 pennants and stamps on ebay this week. Take a look. Panels&Peices