The Coolest Baseball Card of All Time

While going through my 1970 cards for my previous Astros post, I was reminded of one of my all time favorite baseball cards - # 252 Lowell Palmer: 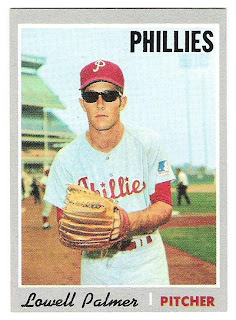 Was there ever a baseball card that screamed out "Cool" as much as this one did ? This first time I ever saw this card, I thought how awesome is this guy - he won't take off his dark shades to have his picture taken. He apparently refused to take them off again the next year as well: 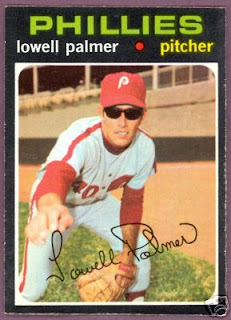 Unfortunately for Lowell, he apparently left them on while he pitched as well. Lowell did not have a terribly distinguished career, although he was among the league leaders in Wild Pitches in 1970 & 1974 and Hit Batsmen in 1974 according to his stats:

He's even got the following Wikipedia entry:

What this entry fails to mention however, was that apparently Lowell Palmer played the assassin Vargas in the James Bond movie Thunderball: 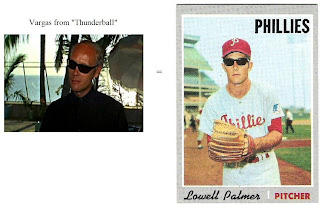 Lowell's final card featured him in the uniform of a team he never pitched an inning for - the Chicago WhiteSox: 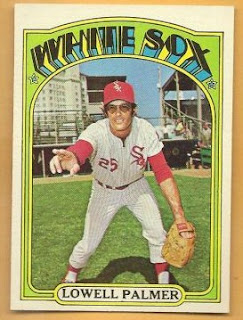 We finally get to see his eyes, although he's still got sunglasses on.

Lowell had been purchased by the White Sox from the Phillies in October, 1971. However, the White Sox released him in May 1972 and he signed with the Cardinals. 4 months later, he was claimed off waivers by the Indians and pitched in 1 game for them.

In June 1973, he became a footnote to one of the more unusual off the field stories in baseball when he was traded to the Yankees for wife swapper Mike Kekich after the news of the wife swapping between Kekich and Fritz Peterson became public and the Yankees decided to put an end to the publicity by getting rid of one of the players. If you've never heard the story about the 2 Yankee teammates who swapped wives back in 1973, you need to check this out (Shocking Moment #6):

Lowell never pitched a game for the Yankees, and in 1974 was purchased by the Padres. Lowell actually saw some action in 1974 getting into 23 games, but 1974 was to be his last season.

Here is an AP story that appeared in June 1974 discussing Lowell's debut with the Padres, and showing that Lowell was a bit of a flake. (Click on the story to have it enlarged in a new window). The best line from the article "When he went to his first major league spring training camp with Philadelphia in 1967, Palmer made a date with the daughter of Phils manager Gene Mauch. "The next day" Palmer recalls, "they sent me back to the minors".

Furthering his flake image, take a look at Lowell's hobby: 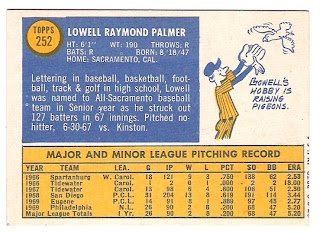 Finally, here are the negatives to this great card. Unfortunately I was outbid when the Topps Vault auctioned these off, but at least I saved the picture. 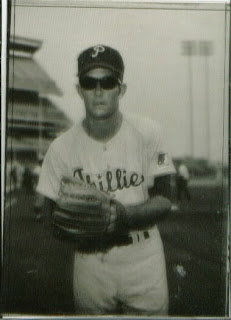 Even though he did not leave much of a legacy in terms of statistics, Lowell Palmer's legend will live on as long as people collect baseball cards and catch a glimpse of the coolest baseball card of all time.

Great story! I always wondered about that White Sox card of him.

That is the sweetest baseball card EVER.

Didn't Sports Collector's Digest do a story about collecting "oddball" cards and mentioned the Lowell Palmer ones as fan favorites?

I wish Andy Warhol or Roy Lichtenstein had done interpretations of that Phillies card.

That a cool story!