For the Baltimore Colts, there are 4 different helmet cloth patches and 1 Hi-Gloss sticker. The patch on the top is the single bar facemask that was issued in 1972 and 1973. The 1972 and 1973 versions of the patch are identical. 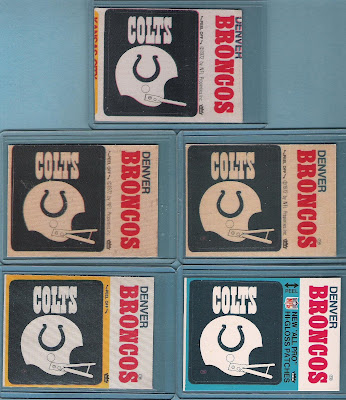 
There are only 3 logo cloth patch variations due to the fact that the same logo patch was issued for 1972 through 1974 as seen below: 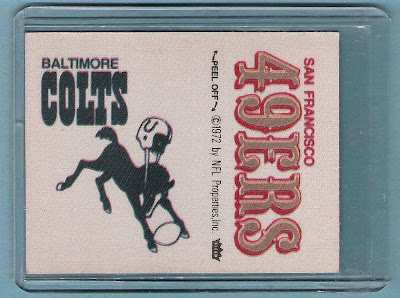 The logo patch was exactly the same in 1975 with the exception of the TMs (Thanks to Craig for the scan!): 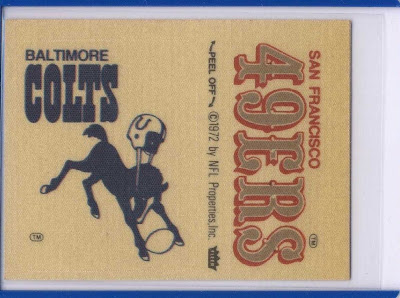 And finally, the 1976 cloth patch and Hi-Gloss sticker, which both have green borders around the logo: 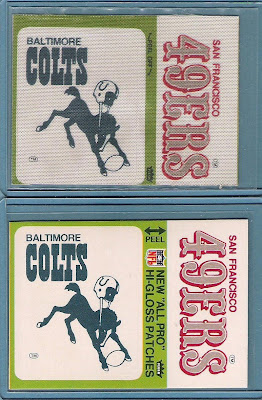 Just like the baseball stickers, Fleer miscuts also on the the Football stickers. ;) On the single bar Colts helmet sticker, you can barely make out Kansas City. This alludes to the fact that the Chiefs wordmark sticker along with the soon to be revealed Cleveland Browns sticker (which was used for your 1975 example), was printed to the left of the Colts helmet sticker. :)