Are you ready for some Football!

With the 2008 NFL season getting ready to kickoff later this week, its time to turn our attention from Baseball to Football. Just as I did with the Fleer Baseball Cloth Patches a few months ago, I will be doing a team by team review of all the Fleer NFL Football Cloth Patch variations for each team.

The Fleer Football Cloth Patches were issued over a 5 year period from 1972 through 1976. Although at first glance the patches appear to be very similar for each of the 5 years, there are actually a number of variations.

Each year there were 2 main stickers for every team: a helmet sticker and a logo sticker. 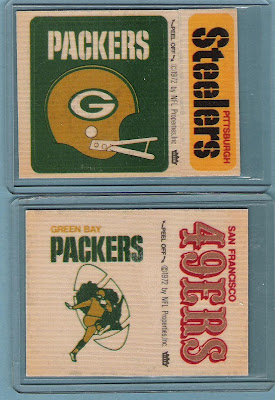 In addition to the helmet & logo patches, there were also smaller patches on each sticker which contained the names of other teams. For purposes of my review, I am going to focus just on the helmet and logo stickers, not the smaller team name stickers (except in a few cases where there are variations).

Today I'm going to explain the main differences in the patches each year from 1972 through 1976, and will start the individual team reviews tomorrow. 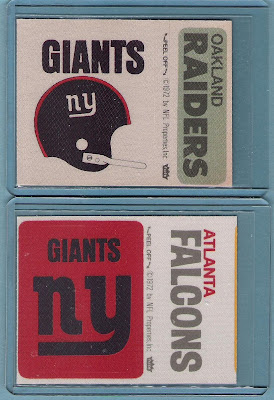 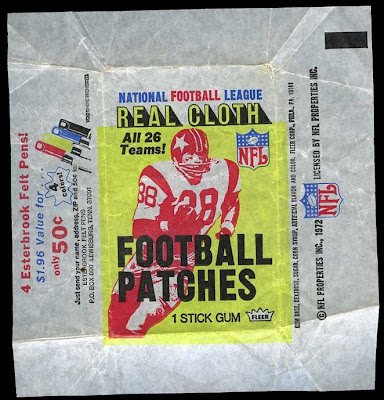 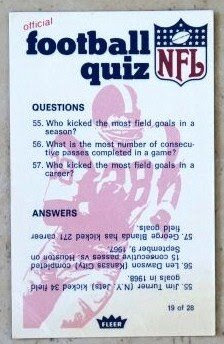 Unlike the Baseball Quiz cards, the NFL quiz cards do not carry any team logos, just the NFL logo.

1973
For most patches, there is no difference between the 1972 and the 1973 patches. Both contain a single bar face mask, and both contain the 1972 copyright. There are only a few teams where you can distinguish a 1972 patch from a 1973 patch, such as the Dolphins: 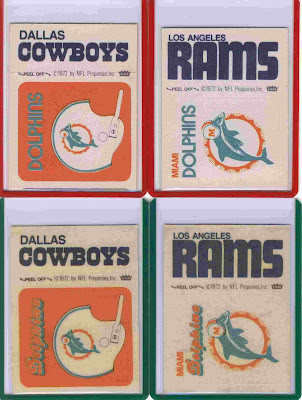 Notice that the script for the Dolphins name is different between the patches on the top and the patches on the bottom. Minor differences like these are about the only way to distinguish certain patches as being from 1972 or 1973.

There were 3 different wrapper designs for 1973 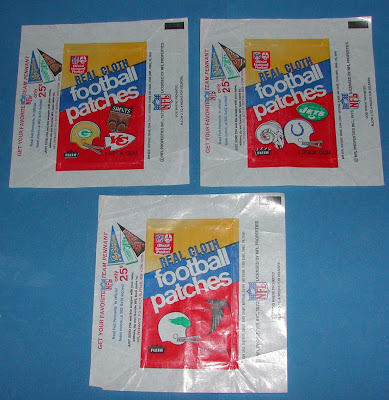 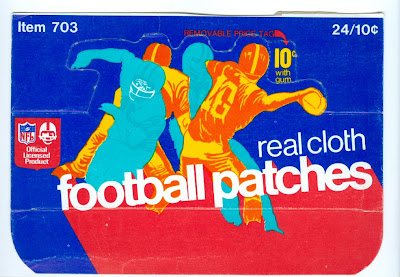 and the patches came with AFC - NFC Scouting Cards: 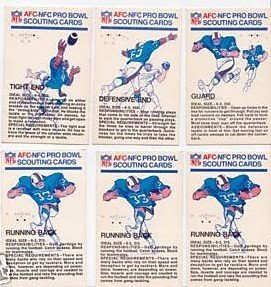 1974
The helmet design changed to a double bar face mask, but otherwise, the design looked almost identical to the 1972 & 1973 patches. Once again the patches have a 1972 copyright. 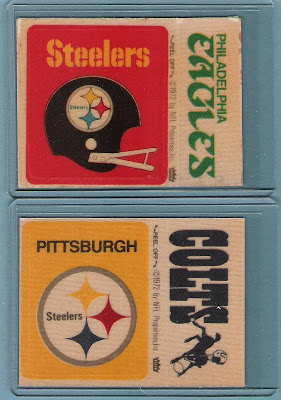 There were 2 different pack designs with team logos 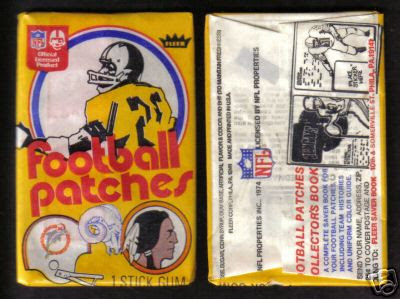 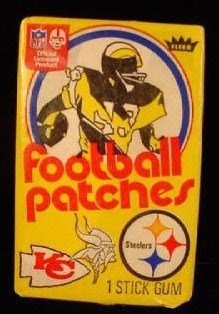 and the patches came with a Football Immortals card: 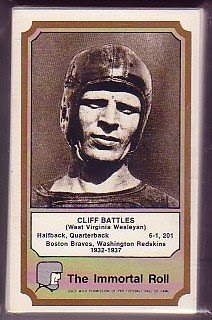 1975
The 1975 patches were identical in every way to 1974 except for 1 small detail - the 1975 patches added a TM on each patch (as seen just underneath the helmet on the top sticker) which was not present on any of the earlier versions (as seen on the helmet sticker on the bottom): 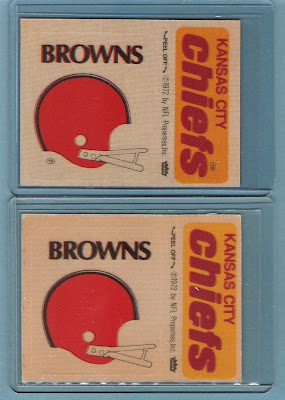 The 1975 wrapper was almost identical as well, with the only difference being a TM on the wrapper in the top left corner: 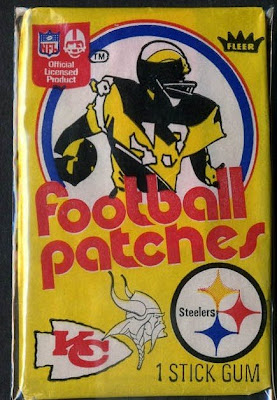 Once again there was a card set of Football Immortals, but the borders for the 1975 set are brown while the 1974 set had white borders: 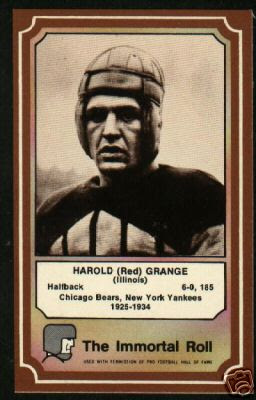 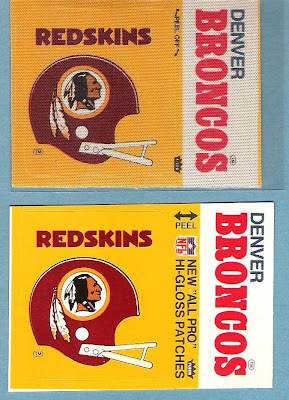 This would be the last year that Fleer produced Cloth Patches.

The other major changes in 1976 were that the borders were now in color as opposed to being white, the 1972 copyright was removed, and the Tampa Bay Buccaneers and Seattle Seahawks made their debuts (as seen on the wrapper): 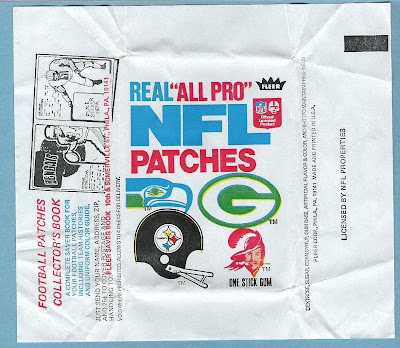 Here are the other wrapper designs: 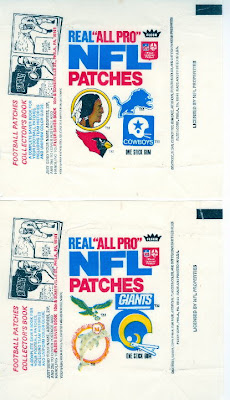 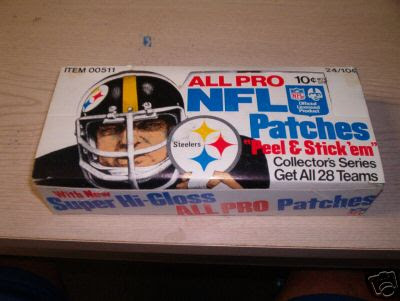 Unlike the Baseball patches which are difficult to assign a date to given that Fleer used essentially the same design with a few variations over a 7 year period, the Football patches are a bit easier to identify given that almost each year something was changed that helps identify the year they were issued.

One last thing I'd like to mention is the great help I've received over the last year or two from fellow Fleer collector Craig who has helped me in understanding the differences between the different years that I covered in today's post, and will be covering over the coming weeks. He has provided me with a number of pictures of items I do not have in my collection, so I want to thank Craig for all of his help in identifying the Fleer Football Cloth Patch variations, and for sharing pictures from his collection to help other collectors better understand what is available. Thanks Craig!
Posted by Fleerfan at 8:02 PM

Ah yes!! Fleer football cloth patch month is finally here. I have been waiting for you to review the football patches. I am eagerly anticipating seeing all the variations through out the coming days this month. Keep up the great work on my favorite collectibles blog on the net!

Thanks for your great comments about the blog. I hope you are enjoying the look at all the variations. Hopefully I'll be able to share some you may not have know about.

Thanks for the great article, Fleerfan. If these stickers had come out a few years earlier, I'd have been all over them. Now on to checking out the rest of your blog!

Hey there, so ive come into possession of dozens of the 72 era patches-almost every team i believe. Is this a valuable collection? How do you recommend i store them? Will they sell?
Thabks for your time and great information above...