With the Chicago Bears, we see the first example of a different helmet sticker between 1972 and 1973. For most teams, there is no difference between the 1972 and 1973 helmet patches as both have the single bar face mask. However, the Bears made a subtle change to the "C" on their helmet going from an all white "C" in 1972 (top left) to a red "C" with a white outline in 1973 (top right). 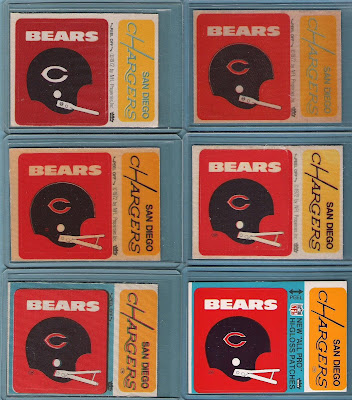 The other difference between the 1972 and 1973 helmet patches is that the background color changed from a darker red or burgundy color to a lighter shade of orangish red which was used for 1974 through 1976 as well. The 1974 version with the double bar face mask is on the middle left, and the 1975 version with the TMs is on the middle right. The 1976 cloth patch and Hi-Gloss sticker are on the bottom row.

One other item to point out is that the color of the San Diego Chargers patch changed from light blue lettering in 1972 & 1973 to a much darker shade in 1974.

The logo patches show the same background color change as we saw with the helmets. This helps us in determining that the logo sticker on the top was probably only issued in 1972 as it has the darker background shade of red 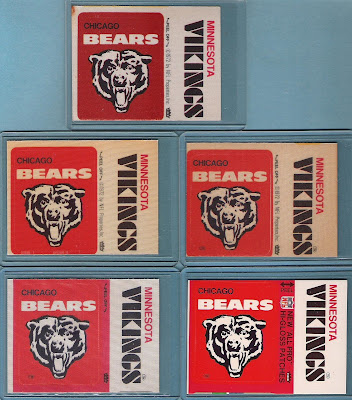 while the sticker in the middle left was issued in 1973 and 1974. The 1975 version with the TMs is in the middle right, and the 1976 Fleer cloth patch and Hi-Gloss sticker are on the bottom row.
Posted by Fleerfan at 8:44 PM