First up on the individual team review of the Fleer NFL Football Cloth Patch variations is the Atlanta Falcons.

The patch on the top is the single bar facemask that was issued in 1972 and 1973. There are no known variations between the 1972 and 1973 versions of the patch. 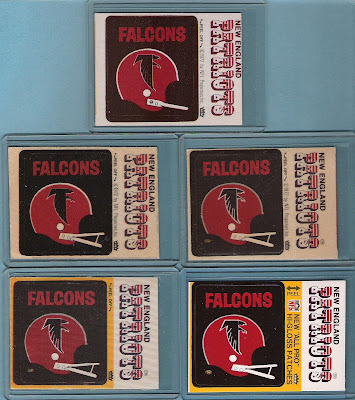 The 1976 cloth patch and Hi-Gloss Sticker are on the bottom row, and retained the larger white outline and the gray helmet stripe from the year before.


Turning to the logo patches, we have the same number of variations. The patch on the top is the 1972 logo patch, and might be the 1973 patch as well. It is distinguishable from the patch in the middle left (which is the 1974 version) by the fact that the white marks on the bird's wings are much more visible on the top sticker and the bird is slightly lighter shade of black. 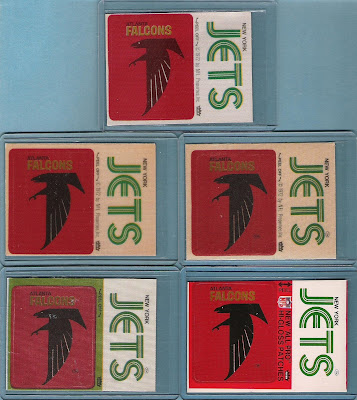 I haven't busted any unopened 1973 packs to find out which version of the patch was available in 1973, so I can't say conclusively which version was produced in 1973. There will be other logo stickers throughout the review where this is the case as well. There is enough of a difference in the patches to say that there is a variation, but its not always possible to tell if the change happened in 1973 or 1974.

The patch on the middle right is the 1975 version as the patches contain trademarks (TM)).

I wonder why they got paired up with the Jets and Patriots. At least there aren't dozens of team variations.

Yes, thank goodness they stayed consistent with the team pairings each year and didn't create even more variations!