The Oakland A's take the prize for the highest number of City / Logo Patch variations with 6. The earliest patch had a logo with a green baseball, followed by 2 patches with white baseballs. 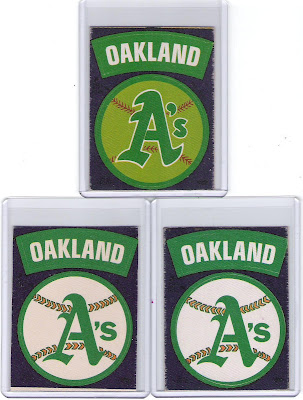 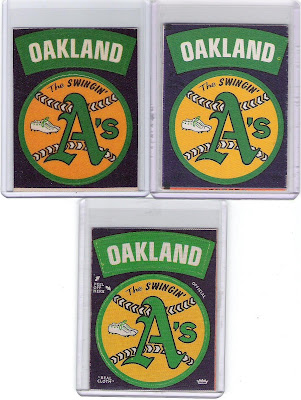 The final patch was even a bit lighter in terms of the shades of green and yellow, but the biggest difference is that the directions on the border to "Peel Off Here" and the other information on the border is now in white instead of black so that you can actually read it.

There are 3 versions of the Cap / Team Name patch. The earliest patch is on the top left and has as an "A" which is thinner and in a slightly different script than the patch on the top right: 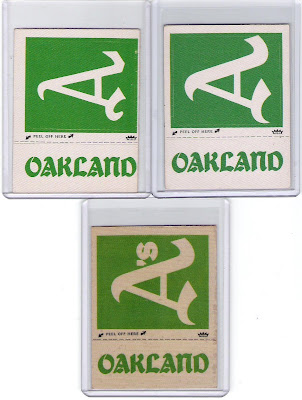 The final patch added " 'S ", and has a slightly lighter shade of green.
Posted by Fleerfan at 8:35 PM

How long did the A's use the term "Swingin'" to describe themselves?

That is a tough question? Based on the patches and quiz card packs, these are years that the logos debuted.

1972 would appear to be the start year for the Swingin' A's. However, while searching Ebay, I made a discovery.This happens to be the 1971 A's media guide, and it features the Swingin' A's. Given that, it is possible that Fleer was either unable to obtain that logo for 1971 or MLB did not allow the A's to use it nationally since any logo changes had to require a years notice.Note link is temporary, was become dead in a moments notice

As for the end of use of the Swingin' A's logo, I'd imagine that it came to an end after Charles Finley was forced to sell the A's after his divorce. According to Wikipedia (not always reliable, says it was 1981. Given the year's notice, the logo change would around 1982 or 1983. Note that Topps team leaders card from 1982 still uses the Swingin' A's logo. It is somewhat common that if a media company didn't update their logo, it probably was in use up until the "Bash Brothers" era of the late 1980's. But given that Topps was a year behind logo wise in the 1980's, 1987 still had the trident Mariners logo for one, 1983 would be a safe guess to when they replaced the Swingini A's logo with a "Plainer" logo with A's in Yellow with Green trim,the world OAKLAND ATHLETICS encircling the "A's" inside of a white circle with a green outline.

According to Fleer, the A's were "Swingin'" until 1981, as this was the last year that the A's used "The Swingin' A's" logo, at least in terms of what was produced by Fleer. The 1982 Fleer stickers used a much simpler and plain A's logo, and refers to the team as the Oakland Athletics.

The point about Charley Finley selling the team around this time makes sense as it would coincide with the new owners wanting to forge a new look for the team through a revamped logo.