Next on our list of teams to review is the Philadelphia Phillies. There are 3 City / Logo Phillies patches, with the earliest version containing the older logo with the 1960's era cap as seen on the top of the picture below: 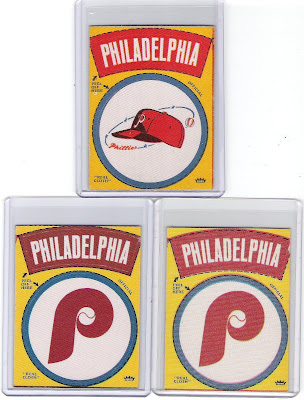 This was followed by the new logo that was used starting in 1970. A slight color variation can be found for these patches with darker and lighter shades of burgundy.

There are 4 different Cap / Team Name patches, beginning with the patch on the top left which is the earliest patch and shows the late 1960's version of the "P" on the cap: 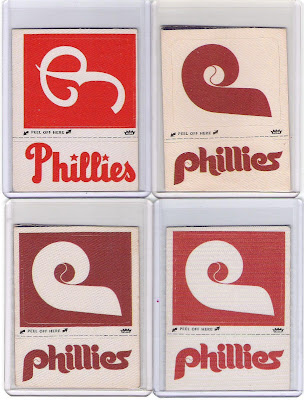 There is a less commonly found version of the 1970's "P" with a burgundy "P" against a white background as seen on the top right. The more common versions of the patch have a burgundy background with a white "P", with lighter and darker shades of burgundy just like we saw with the logo patches.
Posted by Fleerfan at 9:07 PM

Can you tell me the release year on these? This blog has been great in helping me put years to various stickers I've gotten in oddball lots in the past, but on the few I have like this I can't find a definitive answer (or haven't looked hard enough if it's on here).