Even though the Texas Rangers didn't have any patches until 1972, they were still able to end up with a few variations between 1972 to 1975. 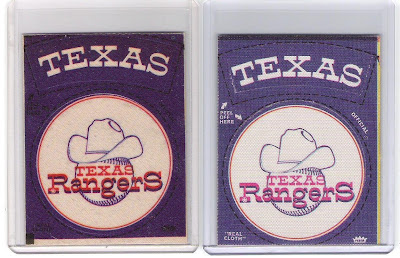 In addition to the different colored directions, there is a slight color variation in the blue border as well as a difference between the red lettering on the left and the more pinkish letting on the right. The patch on the left is the earlier version.

Those same color differences can be found on the Cap / Team Name patches: 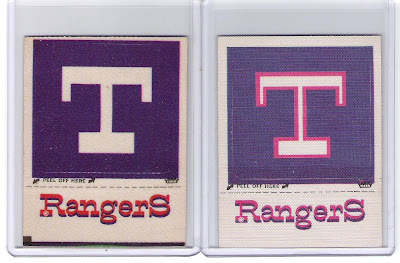 In addition, the earlier patch did not have a colored outline around the "T".

We're almost to the end of our team by team review of the Fleer Baseball Cloth Patches. Tomorrow we'll review the final team on our list which was the team that ultimately became the Texas Rangers.
Posted by Fleerfan at 8:37 PM

I know that you will reveal the ol' Washington Senators patches later today, but I have a question to ask. Washington, is the last team alphabetically, but didn't Major League Baseball themselves have a patch in this collection? If they do, could you also reveal that? Thanks for the trip down memory lane. To quote the "GO,GO, YOU PILOTS" song, it's been a gas. :)

Thanks for the spoiler!

Yes, the MLB logo variations will be coming this evening.

Glad you've enjoyed my review. I'll be doing the football patch variations a bit later this year as we get closer to football season, so hopefully you'll find those interesting as well.