If you've never seen the Dinosaurs Attack! set, you owe it to yourself to check out Dave's review of one of the stickers from the set as well as his post about picking up the set.

The timing actually couldn't have been better for Dave to take a break from posting his weekly Fleer sticker since I had been planning on posting the stickers he sent me this week to help me complete 2 Fleer sticker sets that I've been trying to finish.

Let me start with a little backgound:

Cardboard Junkie was the first site to give my blog a nice writeup shortly after I had gotten started. To say thanks for the kind words, I sent Dave a number of Braves stickers, which became the impetus for his weekly "Sticky Saturday" post where he planned to spotlight a different sticker from that collection each week.

One week he posted the 1986 Braves Mini Sticker which I had sent: 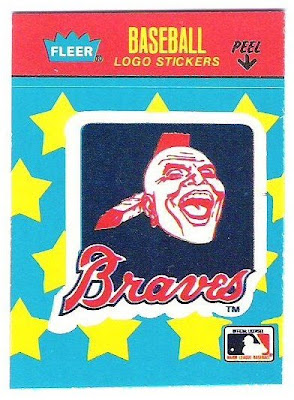 and I commented that I had ended up with an extra due to purchasing 3 mini sets trying to complete a set of all 26 team stickers. While you get a complete set of all the cards in each mini box set, you don't get a complete set of team stickers as there are only 18 stickers included with the cards. After buying 3 sets I was one sticker short - I still needed the Texas Rangers. Dave said he'd keep an eye out for me.

A few weeks later, Dave picked up a 1986 mini set, and it had a Rangers sticker which he posted for his weekly Sticky Saturday review - but alas not the one I needed! For some reason, the 1986 set he picked up had a different background design on the stickers. His 1986 mini set had the 1987 stickers.

The following week he posted the stickers from the 1987 set he had also purchased, and the stickers had the same design as he found in his 1986 set - with one very odd difference - different Mariners logos with the same background: 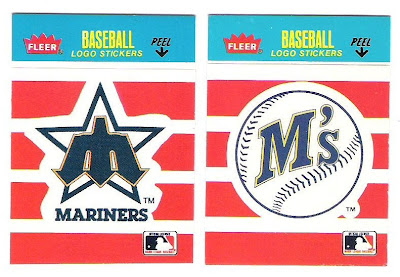 A few weeks later, Dave picked up another mini set, and this time struck gold for Fleerfan - the Rangers sticker I've been trying to track down: 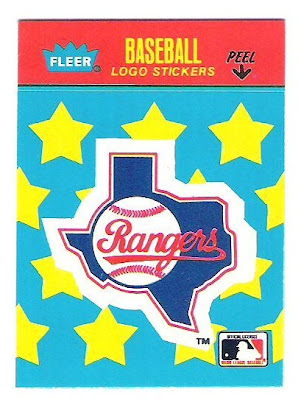 I got in touch with Dave and asked if we could work out a trade for the Rangers sticker. Since I also realized that he had pulled the remaining 1987 stickers I still need to complete my set from his posting on the 1987 box break, I figured it wouldn't hurt to see if we could work those into the deal as well. And since I'm obviously obsessed about this stuff enough to blog about all the different Fleer variations I can find, I inquired about the Mariners variations as well.

Dave being the super great guy that he is said no trade necessary - I'll be glad to pass along what you need. This week, I received the 1986 Rangers star background sticker, the 1987 Mariners variations, and the other 1987 stickers I needed to complete that set: 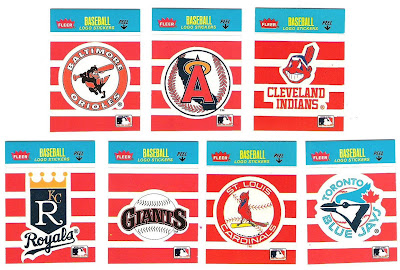 Besides helping me complete these 2 sets, Dave threw in a pack of 1988 Fleer Star Stickers as well. Many Thanks for helping me finish off these 2 sets Dave!

Programing note: Sticky Saturday will return to its regular channel next week. On ESPN2, we'll be showing "Bass: Battle on The Border presented by Mahindra Tractors".
Posted by Fleerfan at 8:54 PM