The Cardinals have 4 different City / Logo patch variations. The earliest patch on the top left had an orange border which then turned to yellow: 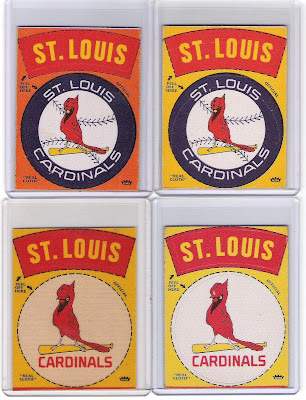 Later versions of the patch removed the baseball background and the blue circle around the logo. This design can be found with 2 different versions as there is one very subtle difference between the two patches on the bottom.

Take a close look at the cap on the Cardinal:

For the Cap / Team Name patches, there are 2 versions: 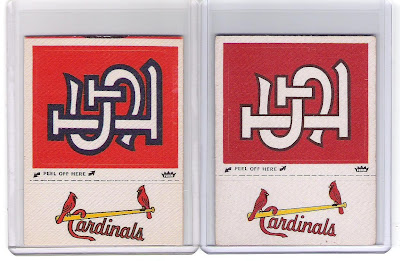 The earlier version of the patch has a brighter red background, and thicker lines around the interlocking STL monogram versus the patch on the right.
Posted by Fleerfan at 8:31 PM

I acquired both of these from the same person. I'm guessing they bought a few packs of patches where the die cuts ended up being way off!