As a follow up to my post from a few days ago on the history of the Seattle Pilots, here is a video showing pictures of Sicks Stadium during the time the Pilots were playing there as well as what became of the stadium after they left set to the music of the "Official Team Song of the Seattle Pilots": 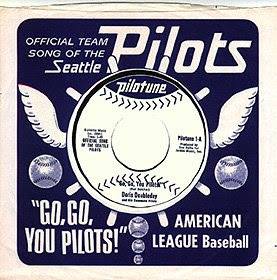 They might not have had a local TV contract to give the team much exposure that first year, but after hearing "Go, Go, You Pilots" on Seattle radio, how could you not want to catch a few Pilots games! 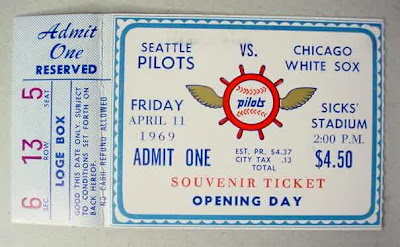 If you'd like more information on the Pilots, in addition to the books I previously mentioned in my earlier post ("The 1969 Seattle Pilots" and "Ball Four:), you might want to check out this web site which is dedicated to the Pilots.
Posted by Fleerfan at 7:26 PM

I came over here from the Uniwatch blog--nice slideshow.

I accidentally visited the old Sicks Stadium site while in Seattle a few years ago. There is now a big-box hardware store in its place (which is where I was going), but they have marked out where home plate and certain other stadium landmarks used to be.

Casey - Thanks for stopping by. Thanks also for the information on what has become of the old Sicks Stadium site. I'm glad to see that at least there is some acknowledgement of the fact that the Pilots used to play there.

I heard a story that on opening day they were still constructing the outfield bleachers as the game began. As the crew would complete a wooden bench row of seats they would let a few more people in to fill em up.

One of the most highly-prized Pilots collectibles is the scorebook or program.

They were pretty standard programs, remembers Pilots public relations director Bill Sears. About the only difference between them and the minor league programs were that the Pilots were a bit thicker and had more advertising.

There were around eight articles per scorebook, with most of the articles repeating from one edition to another. Virtually all of them featured the same article about general manager Marvin Milkes. That was Marvin! laughs Sears. Another frequent repeat was an article about Jim Bouton and his knuckleball.

A different scorebook came out for each homestand, with five basic cover designs and three additional types that were identical to their predecessor except for color.

In addition to articles, handy features included the words to Go, Go, You Pilots!, a baseball dictionary ("For Ladies Only"), facts about Sick's Stadium, a listing of radio stations on which the Pilots could be heard and, of course, a list of player transactions and a roster and so that you could tell Gary Roggenburk from Merritt Ranew.

Depending on the condition and style, Pilots scorebooks now sell for a bit more than the 35 cents they cost at the Sick's Stadium concession stands!

April. cover has artist conception of the Domed Stadium. This is the first scorebook, for APRIL only. Unscored, versus CHICAGO WHITE SOX.

OPENING DAY Souvenir Ticket stub and rain check. Friday April 11, 1969 vs CHICAGO WHITE SOX. This is the large BLUE border version. approx. 4" by 2.25". this was for a LOGE BOX. Rain check is on the back of the ticket. This is the FIRST Seattle Pilots home game.

Thanks for the information and the pictures!

I was at Sicks Stadium at least three times during 1969, the Seattle Pilots only season in Seattle. My father took my brother and I there. I don't rember is we won the games we attended. What I do remember is the smell of hotdogs and cigar smoke. Some things just don't fade from one's memory. But, the best memory of all was being with our dad!! Love you PILOTS!

I remember attending two or three Seattle Pilot games. It was my dad, my brother, Scott and I! Talk about exciting. I was 11 year old at the time. I can't even tell you if we won the games we attended. All I know is that my heart was beating like crazy the whole time and I was so happy! I do remember the smells at the game...cigar smoke and hot dogs...WHAT MORE DO YOU WANT?

1969...It was my dad, my brother, Scott and I Kris. What a time. I was EXCITED! It was a big-league team finally in Seattle.

We attended three games that season. I can't tell you if we won or lost those games....what I can tell you is that I was excited...and all I remember is I was smiling the entire game and I smelled cigars and hot dogs. Oh well, what more do you want anyway:?

I just recently bought a Cooperstown Collection Pilots cap, and have gotten very interested in their fascinating history. It seems I discover a new website almost every day with more info on the Pilots. I wanted to thank you for your wonderful website and for the time you put into it. My next purchase is going to be the book by Kenneth Hogan on the history of the Pilots which seems to be the Bible about the Pilots. I wish I could have gone to a few games back in 1969. WHAT a memeory that would have been!!